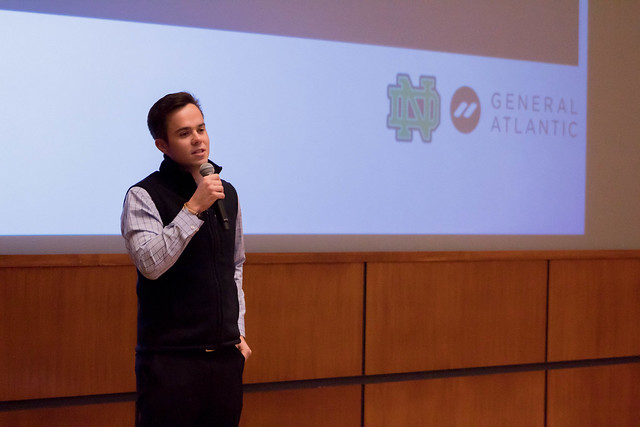 On April 10, David George of General Atlantic hosted “An Introduction to Growth Equity” The event was the sixth in this semester’s Robert K. Wilmouth Speaker Series, a number of lectures hosted by NDIGI designed to further students’ knowledge of the science and art of investing. The objective of the event was to expose students to the inner workings of the growth equity industry. George also spoke on career discernment and the hiring process at growth equity firms such as General Atlantic.

What is Growth Equity?

Growth equity, or growth capital, is a form of private equity in which firms invest in relatively mature companies attempting to in some way expand operations. It differs from venture capital in that a growth equity firm will typically invest in a company that is further along in its development than the startups that seek venture funding. “We don’t take product market risk,” said George. “We take market share risk.” The best way to view growth equity, he explained, is as “a middle ground between venture capital and the public market.”

George went on to explain why a company past the seed and venture stages seeks growth capital. Most of the companies they invest in are attempting to fund investments into sales and marketing, new geographies, or new products they believe they have found a fit in. They may also have newfound competitors and are attempting to expand faster than them.

What do growth investors look for in an investment?

There are several markers that a growth investor will look for in a business, explained George. One of the most important is that the company operates in a large market, and has a good competitive or differentiated position within that market. They also look for companies that have what George termed a “network effect”––meaning the value of business increases with each additional user. Lastly, firms look for a strong and professional management team that they believe can lead the company’s expansion. “If you check all these boxes off,” said George, “you have everything that makes a business great.”

George concluded his presentation speaking on career paths in the industry. Traditionally, he said, one would enter growth equity by first spending two years in investment banking. A growth equity firm would then hire that person as an associate.

Recently, however, General Atlantic has introduced an analyst program that hires candidates directly out of undergraduate school. Taking approximately five people per year, the program serves as a replacement for investment banking tenure. This role, said George, allows entry-level hires to “get more exposure to people who spend all day thinking about deal judgment, and learn more about deal judgment themselves.”

George then told the audience what he looks for in candidates. A strong GPA and successfully answering technical questions in the interview are crucial. Perhaps more importantly, however, George said “I look for proof and ask questions that demonstrate candidates can think like an investor.”

George and other principals at General Atlantic will often ask candidates this hypothetical question: There are two dry cleaning businesses, offering the exact same services, and operating at the exact same size. One of them sells in a single city. The other sells across the United States. Which business would you choose to invest in?

There is no correct answer; it does not matter which business the candidate chooses. What is important, said George, is seeing the thought process behind the candidate’s choice and understanding why he or she chose the business.