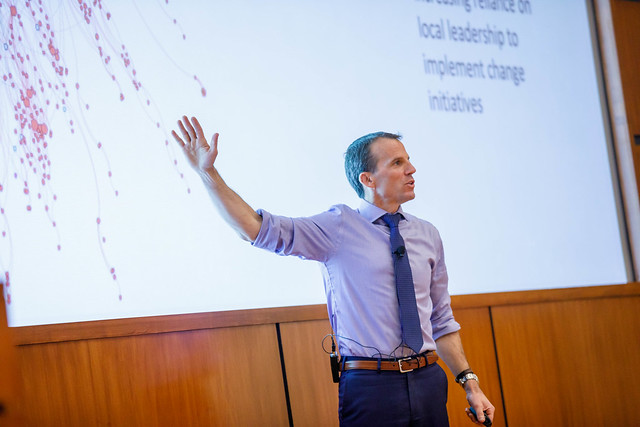 On Nov. 5, Chris Fussell, President of McChrystal Group, hosted “One Mission: Leadership.” The event was the sixth and final in this semester’s Robert K. Wilmouth Speaker Series, a number of lectures hosted by NDIGI designed to further students’ knowledge of the science and art of investing. The objective of the event was to explain how Fussell’s experiences in the Navy during Operation Iraqi Freedom led to the development of a new leadership philosophy now employed by the Naval Special Warfare Development Group, and how that philosophy can apply to other industries.

Fussell serves as President, Director and Managing Partner of McChrystal Group. Before his time at McChrystal Group he was commissioned as a Naval Officer in 1997 and spent the next 15 years on US Navy SEAL Teams. He was then selected to enter the Naval Special Warfare Development Group, where he spent the second half of his military career. Throughout his service, Fussell was in charge of groups such as eight-man tactical teams and Task Force elements in Iraq and Afghanistan comprised of several hundred operators.

In 2012, he exited the Naval Special Warfare Development Group to join McChrystal Group. Fussell went on to earn a Master’s degree in Irregular Warfare from the Naval Postgraduate School, receiving the Pat Tillman Award for highest peer-rated Special Operations Officer in the program. He also serves as a Senior Fellow for National Security Affairs at the New America Foundation, a non-partisan think tank dedicated to understanding the next generation of challenges facing the United States.

He co-wrote One Mission: How Leaders Build A Team Of Teams, which became a New York Times bestseller. Fussell regularly does media interviews, gives keynotes speeches, and speaks to business leaders at roundtables and panels.

The McChrystal Group is a global advisory services and leadership development firm founded by General Stan McChrystal. It exists to improve the performance of organizations. Its networked "team of teams" approach challenges the traditional, command-and-control style of management and helps companies overcome the barriers of today's dynamic and complex operating environment. To learn more, visit McChrystal Group's website.

Fussell began his lecture with a discourse on two different types of team structures: hierarchies and networks.

A hierarchy (pictured above left) has a definitive top-down structure, where those at higher levels are responsible for those below. Its strengths are in its order, in being a highly organized system with a clear distribution of power. The highly structured nature of a hierarchy, however, also leads to the system’s weaknesses. A hierarchy can be very difficult to change; the speed at which a new idea moves down the chain of command can be incredibly slow. The top-down system also limits creativity.

A network (above right), conversely, forms a web-like structure. Networks have a certain elasticity that allows them to change quickly and efficiently. Fussell stated that “networks are also inherently more creative [than a hierarchy]. Creativity can happen everywhere organically all at once.” One of the problems networks face is splintering––groups with different ideas may easily branch too far off and form subnetworks. A lack of clear leadership in networks may lead to confusion concerning purpose and direction.

He then explained how these structures related to his service in the United States Navy. When Operation Iraqi Freedom began in 2003, Naval special teams had a very traditional, top-down structure. Initially, said Fussell, this structure and strategy proved successful. Soon, however, Fussell realized that strategy would not be sufficient for the remainder of the war:

“Iraq started as a conventional fight. We won that fight quickly, but it soon transitioned. A new type of problem arose that reached a level of complexity we were not ready for. We realized we were responding too slowly, especially when compared to the local organizations and threats we were fighting. The real issue was we didn’t take the time to step back. That manifested in a number of ways: we had resource constraints we never had before. I grew up with there being a single isolated problem in the world every now and then. Suddenly, we had ten teams that needed to go out and solve twenty problems. We didn’t know how to think like that. We also had labor shortages. Our jobs are difficult, and bringing people into the field is not a quick process. We had to figure out ways to do more with the same amount of people. Additionally, we overestimated how much of a separation modern technology would create for us on the battlefield.”

The Naval Special Warfare Development Group transitioned away from a strict hierarchy and built a “hybrid system” that maintained a top-down structure but created networks out of the different levels of organization. A system was devised in which teams would divide operations into twenty-four hour cycles. They would ‘huddle up’ for 90 minutes to discuss operations and strategy. Teams would then have twenty-two hours and 30 minutes to execute their intended mission. “What this did,” said Fussell, “was allow us to shift our focus away from ‘win at all costs’ to a system based on credibility. That credibility was based on competence, integrity, and relationships.” This new interplay allowed the Task Force teams to make adjustments when necessary and move through situations with both speed and success. Fussell stated that “it became a very well attuned system, and the lessons we learned by creating that system in that environment can apply to other spaces as well.” This is the mission of the McChrystal Group, which seeks to use the knowledge Fussell and his fellow officers learned in Iraq and Afghanistan to improve the management of organizations, bringing them closer to their objectives. 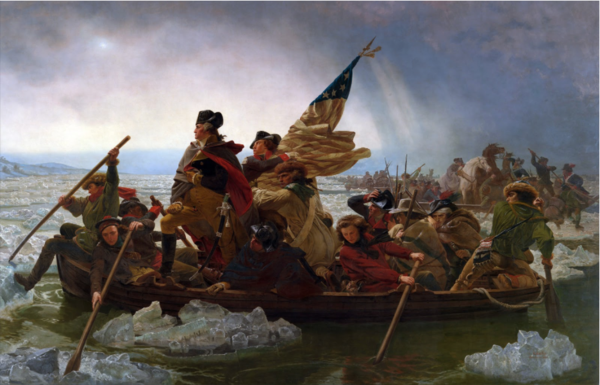 Fussell concluded his presentation by showing the audience a picture of Emanuel Leutze’s famous 1851 painting, Washington Crossing the Delaware. The painting hung in the West Wing of the White House for decades, before being moved to the Metropolitan Museum of Art in 2015. He pointed out Washington’s heroic stance in the rowboat as he gazes toward his objective: the pinnacle of a leader.

Fussell then made it clear, however, that there are a number of errors in the painting: for one, the Continental Army crossed the Delaware River at night. The ice would have been in thin sheets, not the large glacial slabs depicted. Perhaps most importantly, Washington would not have been standing up in the center of the boat: it would have tipped over.

Regardless of the historical inaccuracies, this image of Washington has become ingrained in the popular consciousness as how a leader should look and act. This, said Fussell, is a dangerous notion, one that ignores the lessons he learned in Iraq and does not generate production in teams.

He said that “our sense of what leadership is is based on what some screenwriter wrote, or on some artist’s completely erroneous rendering. The challenge many of you will face is breaking that model. You don’t have time to act like the person standing in the rowboat. You need to see yourself as a gardener. Gardeners don’t yell at things to grow faster. They protect things from outside elements they can’t control. They nurture. And they know that, when left alone, that system will likely end up growing better.