Notre Dame alumnus Jimmy Dunne shared stories from his life and experiences at Sandler O’Neill & Partners during a fireside chat with Erin Bellissimo, managing director of the Notre Dame Institute for Global Investing. His Jan. 29 talk was part of the Robert K. Wilmouth Speaker Series, hosted by NDIGI to further students’ knowledge of the science and art of investing. 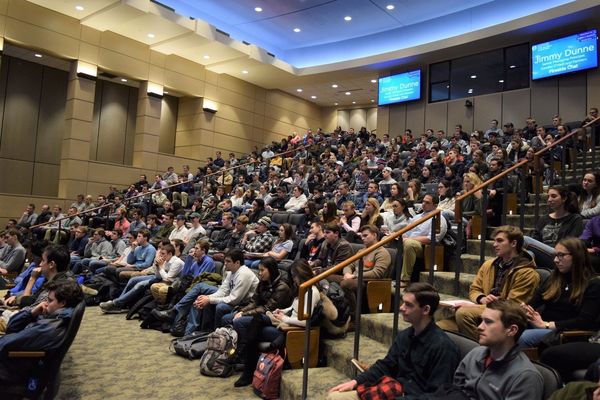 Dunne is senior managing principal of Sandler O’Neill, which he co-founded in 1988 after working at Bear Stearns. Sandler O’Neill is the largest independent full-service investment banking firm focused on financial service companies. At the company, Dunne oversees long-term strategy and helps manage many of the firm’s most important client relationships. Beyond his work at Sandler O’Neill, Dunne has generously supported the University of Notre Dame through various fundraisers and scholarship programs. He also sits on the University’s Board of Trustees. He graduated from Notre Dame with a bachelor’s degree in economics.

Dunne began the fireside chat by speaking about his life and his personal attitudes towards business. As an Irish Catholic from Long Island whose parents had no college education, Dunne said that his parents taught him early on the importance of sticking to your values rather than following the crowd. He also remarked that his faith helps ground him and that Catholic principles lay the foundation for everything he does. When asked about how he manages his time between his family, work and love for golf, Dunne said that there is no perfect balance. Life is about prioritizing, and different parts of life will get short-changed at different times. With that in mind, Dunne advised students to accept their schedule and wholeheartedly devote themselves to whatever they are doing in the moment.

As the discussion moved towards Dunne’s work at Sandler O’Neill, Dunne described how he promotes a productive company culture. When he interviews people, Dunne said, he hires people who are humble and have “refined desperation.” He encourages employees to stay authentic and admit their mistakes. This philosophy is built on Dunne’s idea that the world breaks down in two ways: finite issues and infinite issues. He tells his employees that they engage in finite issues, so it is in their best interest to always tell the truth and respect that. As a company, Sandler O’Neill never overlooks opportunity and will work with a business whether they are big or small. Dunne remarked that he “doesn’t care about any sort of labels” and that sticking to this principle has helped Sandler O’Neill become so successful.

A defining point in Dunne’s life was the Sept. 11 attacks. Sandler O’Neill lost two of its co-founders and over a third of its employees. Reflecting on how Sandler O’Neill was able to recover from the tragedy, Dunne commented on how the company’s first priority was helping the families of victims, rather than focusing on traditional business decisions that would lead to financial success. The decision to create benefits for the families of victims created community, helped build a positive reputation, and ultimately gave the firm an edge because they were the first business to offer this kind of support to the families. “It was about doing the right thing,” Dunne said.

Finally, Dunne gave advice to students about how to make the most of their time at Notre Dame. According to Dunne, although many business students see only one route to success, building a good career is “a mile-long race” and the student who got a prestigious internship is only “one-tenth of a second ahead of you.” Students can stand out and succeed when they take initiative and lead something early on in their career, because it will better prepare them for challenges down the road. “Not everyone can be a CEO,” he said, “but get in charge of something at some point.” Finally, he told students to always have a good attitude and put forth a lot of effort. With those qualities, Dunne said, anyone can unlock their full potential.